Meet the Team Behind Bellemore Optometry

At Bellemore Optometry, we care deeply about your health and well-being. We want you to feel like your eye care needs are being met, which is why we take great pride in providing the communities of Tecumseh and Windsor with high-quality, patient-centric eye care and health education.

Because your wellness is our priority, we make sure that our dedicated eye care team goes above and beyond to help you find the perfect frames and quality lenses to meet your vision and budget needs.

Such great service! Tanya was so helpful in picking out frames! She even brought hers from home for me to try on so I could see if I liked them before ordering! Would definitely recommend!! Can't wait to pick up my new glasses!!

Excellent service, great selection of frames. Chocolate chip cookies were the best. I love my new glasses. Thank you so much, Tanya and Janice.

We have found our new Optometrist! Absolutely best experience I've had, thank you for being so kind and welcoming.

Always a pleasure coming to this office. The customer service is luxurious and very easy.

These girls are so awesome!! Been coming since my girls were babies 10 years ago. I live nowhere near the office now and still make my way to them for their personal service and help!!

They are always friendly and take care of all my ocular needs.

Our optometrists are highly-skilled and educated professionals who are dedicated to providing the very best in primary eye care diagnosis, prevention, and treatment. Our doctors are passionate about their work because they know it is for your eyes, your life! 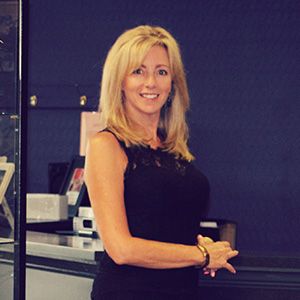 Dr. Bellemore graduated from University of Waterloo in 1990 with a Bachelor of Science and Doctor of Optometry Degree.

She moved to Windsor and opened a multi-doctor, full-service vision and eye care practice three years after graduating and now has a second location in Tecumseh.

Dr. Bellemore worked closely with the WECDSB to provide vision screenings to JK and SK students shortly after starting her new practice. She then founded Kids Health Day, an annual health and education event offering free vision, dental, hearing, spinal, speech, language, and growth and development screenings to children in Windsor and Essex County. This collaboration with the elementary school boards, community partners and volunteers provided a free barbeque, prizes, games, crafts, and a fun health-focused day to children ages 1 to 13.

Dr. Bellemore is the current president of the Windsor Essex Optometric Society and dedicated to the continual education of optometrists in her profession. She is a member of the Rotary Club of Windsor 1918 and an active Youth Exchange Counselor to teens from Australia, Germany, and France. She is a member of the Ontario and Canadian Optometric Associations and Eye Recommend network of independent optometrists.

Dr. Bellemore enjoys time with her family, travel, fitness, and a healthy lifestyle. She is fluent in French, plays piano and flute, and is currently learning Spanish and German.

Dr. Bellemore is committed to serving her family and community and providing excellence in eye care to children and adults.

Dr. Chris De Guzman received his Bachelor of Science Degree from the University of Manitoba where he was on the Dean’s Honour List. He completed his Doctor of Optometry (O.D.) Degree at Western University of Health Sciences College of Optometry in California. He completed his clinical externships in Ocular Disease, Vision Therapy, and Primary Eye Care in Orange County, Greater New York, and Beverly Hills. Following graduation, he was offered a position in Beverly Hills where he saw a wide variety of patients including many A-list celebrities. After his U.S. work permit expired, he moved back to Canada to be with his family. He practiced at busy clinics in Calgary and Lloydminster Alberta for 2.5 years before moving to Windsor to pursue exciting new opportunities with his partner.

At the age of 21, Dr. De Guzman was accepted in Optometry school but was then offered a record deal in the Philippines, so he decided to pursue his dreams of becoming a singer for 4 years before returning to Optometry school. He has won Best New Male and Favorite Male Artist at the Philippine Grammy Awards. His other hobbies include modifying cars with his twin brother, traveling, and trying new places to eat.

Dr. De Guzman is excited to join Bellemore Optometry and Eyes on Tecumseh. He is available for full-scope eye examinations in both English and Tagalog (Filipino). He is passionate in providing the highest quality care and an exceptional experience to all patients in Windsor and surrounding communities.

Dr. De Guzman welcomes new and returning patients at both locations in Windsor and Tecumseh.